2021 was a booming year for NFT Game trends, seeing many success stories that have shifted blockchain games from an unproven concept to an opportunity that even traditional game publishers are seizing. With NFT, or Play-to-earn games hitting the mainstream, people are becoming more and more familiar with the idea that the GameFi ecosystems can actually provide users with real financial incentives and social values. They are also gradually starting to recognize the accumulation of digital assets as an investment with long-term benefits.

However, the rapid development of the blockchain entails numerous unresolved risks that still trigger doubt and uncertainty about the practicality of this breakthrough technology. Therefore, the growth of NFT Games is still facing tremendous obstacles, mainly stemming from a difficult-to-close mindset gap between the traditional gaming community and the P2E players. This is also greatly affected by the imbalance between the NFT Game gameplay (the “play” part) and the activities of reaping rewards by playing (the “earn” part) – a seemingly never ending issue that most NFT Games in the market have yet to settle. 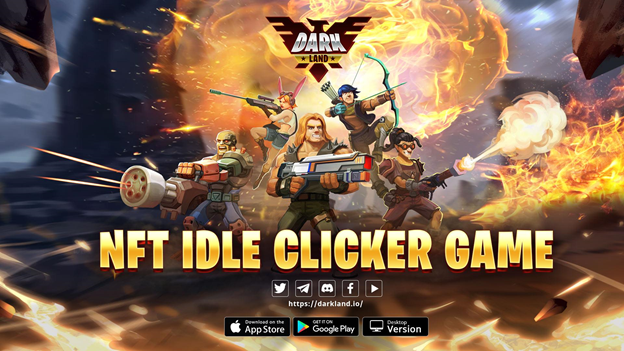 An unique mechanism called “Smart Staking” that can attract a lot of traditional players.

Various never-before-seen modes for an NFT IDLE Defense game built that are powered by blockchain.

In this “Smart Staking” mechanism, investors or players with excess resources (NFTs, tokens) can stake these assets into nft / token pools. Developers will use this pool to provide initial resources for traditional users to use to play games. All staked assets still belong to the original owners, and additionally, the number of resources benefited by the initial capital will also belong to them. Only a part of which, when reaching a certain threshold, will be paid to traditional non-crypto users who have played the game without investing tokens into the game. At this point, the traditional user will have an option to convert that small portion of the payment to Dark Land’s tokens through the blockchain network and will be instructed to create a wallet and finally be able to officially own the earned assets.

The team reckons that letting conventional players notice potential financial gains first before their actual investment will encourage them to adopt the use of crypto softwares and protocols. With this mechanism, the current biggest barriers making it difficult for nft game developers such as users having to own wallets and users having to put in initial capital will be significantly resolved.

Additionally, DLS believes that smart staking and the utilization of the traditional marketing methods will surely help drive the mass adoption of blockchain technology. User acquisition through ad networks is very common with traditional game publishers, where it is completely normal to bring in several hundred thousand new users/day. However, the inherent barrier of nft games makes it difficult for the game to launch in store and also difficult for users to access. By initiating the “smart staking” feature, or in other words, allowing non-crypto players to experience the game first, and combine it with an approach of growth marketing strategies for traditional games, Dark Land Survival can release a huge demand for the game’s ecosystem in particular and the blockchain ecosystem in general.

If successful, it will be a groundbreaking resolution, opening a new door of access for traditional users and paving the way for other NFT projects to thrive.

The essence of most games ever developed is clearly the competition among players, and the success of them mostly lies in their gameplay. Dark Land Survival possesses a compelling game mode that is not only newcomer-friendly, but also promises very high competitiveness. In the PvP – Dungeon gameplay, players will participate in PvP events, either 1vs10 or 1vs99 to compete with each other for valuable rewards such as NFTs. For example, in “PvP Dungeon – Fight for land” mode, the player who wins the match (e.g 1vs10) will win a very valuable NFT Land with the number of resources waiting to be exploited.

Similarly, in a different mode called “Dungeon – Treasure Hunt”, an event will take place in a specific Land area – owned by a player (now a landlord) – where an item box will be placed and the player will have to surpass 99 other opponents (in a battle-royale style) to win a lucrative NFT box. In addition, different Dungeon and Quest modes will also be further designed based on the location and other characteristics of the Land, which will be updated later in the project.

Private round has ended, now it’s time to move forward.

Dark Land Survival recently closed its massively oversubscribed private round, which “exceeded the team’s humble expectations” – said Lily Nguyen – CEO. “With enough funding, we’re confident in materializing our ambitious dream of creating an actual impact, not only to the crypto realm, but also to society”.

Its IDO date has yet to be finalized, but the team planned to hold a multi-launchpad IDO event for $BIG token tentatively in March.

Dark Land Survival is more than just a NFT IDLE Zombie Defense Game powered by blockchain technology; Built on BSC, it’s a massive open world that comes with a whole new perspective. Aside from the Play to Earn mechanic with a rich story, Dark Land Survival offers a superior gaming experience with various gameplay modes and features such as campaign, dungeon, raid mode, construction mode, landlord, and more… All of which encourage players to keep playing and exploring.