Skip to content
HomeBusinessEnteral Horse Ode: Horse Dance Show From The Grasslands Conquers The Audience From All Over The World Mongolian horses are one of the oldest horse breeds in the world. Special species gene, harsh living environment and long-term genetic variation have resulted in the Mongolian horses’ special characteristics of cold tolerance, drought tolerance and strong endurance. Mongolian horses are short in stature and has a poor appearance, however, on the grassland, a land where wind whistles, rains and snows most of the year, they brave hardships, gallop across, and make great achievements one after another, created the unique character and spirit of Mongolian horses: diligent and indomitable. 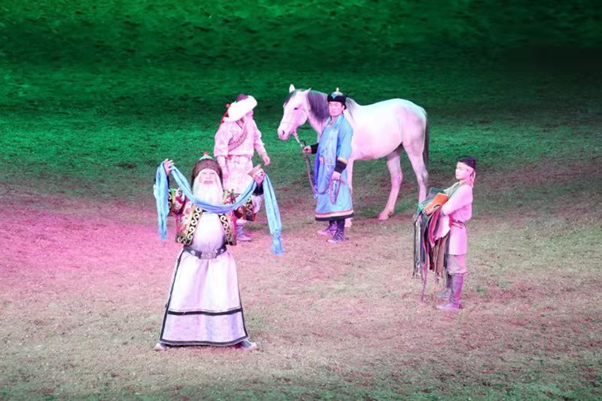 The Eternal Horse Ode is based on the spirit of the Mongolian horses. By telling the growing of a herdsman’s son, the show demonstrates the great historical progress of the Mongolian ethic’s mutual encouragement, forge forward, and pursuit of civilization; it eulogizes the open, inclusive and tenacious Mongolian ethos of this nation of horseback, demonstrates the harmonious coexistence between men and horse, men and grassland, and the poetic living environment of the fairy realm. The entire show consists of four parts, prologue Migration, Act I Home On Horsebacks, Act II Legend Of Horseback and epilogue Horse Ode.  It shows the emotional path of Mongolian’s encounter, acquaintance, companionship, and perseverance with horses. In the performance, there are not only the epic scene of hundred horses running, the warm scene of man and horse’s unity and mutual aid to overcome hardship; but also, the genuine love as vast as the sky, and the devoted loyalty as deep as the sea. 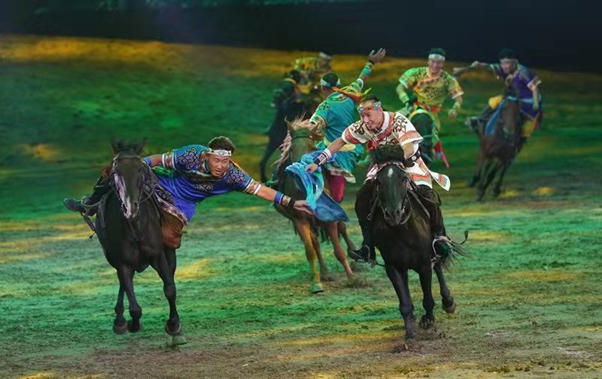 The horse performance has excellent stage machinery, vivid multimedia effects and kaleidoscopic lighting effects made the performance astonishing, being in it, the audiences feel like traveled through thousands of years. The magnificent momentum, dreamlike scenes, aesthetic effect and strong visual impact touched the hearts of every audience attended.

The Eternal Horse Ode was created by the Inner Mongolian Bureau of National Art Troupe, it is a key project in cultural industry of the Inner Mongolia Autonomous Region of China. It has received supports from the state and autonomous regional governments since its establishment. The birth of the show fills in the blank of Inner Mongolia’s Tourism Performing Arts industry, injects new vitality into Inner Mongolia’s tourism economy, promotes the sustainable development of tourism industry and horse industry, enriches the tourism products and attractions of the autonomous region, and increases the economic benefits of tourism. Moreover, the success of the show also led to the improvement and upgrading of the relevant industrial chains, such as horse industry, entertainment, transportation, tourism and others.

The performing content of Eternal Horse Ode and the unique regional venues have a good mutual adaptability in the economic model structure of driving and influencing each other, the social benefits of the play are also very significant. Since its premiere in 2014, it has performed 248 performances and attracted tourists from more than 20 countries and regions, such as China, Russia, Mongolia, the United States, Germany, Korea, New Zealand, India, Hong Kong, Macao and Taiwan, with nearly 280,000 audiences. It has won wide acclaim and international reputation.